The Realities of Traveling With a Baby We are constantly on the move with our little one.   We flew with him to photograph a wedding in the Northeast 5 weeks to the day after he was born.  I remember feeling totally overwhelmed and nervous, and then he slept the entire flight!  Seasoned parents will tell you the easiest is the beginning, and it gets harder the more mobile they get.  I will say though that mom brain in the beginning was a challenge for me — when we arrived at said wedding, I had forgotten my entire stack of work clothes and had 45 minutes to race to the shops before having to report to the rehearsal dinner.  I remember the shock that washed over me as I realized that all I had was a pair of ripped jean shorts, and giggling in the dressing room trying to find something to fit my post baby full feeding body.  Lesson learned!   Since then, we have flown to France, to the west coast three times, and up and down our East Coast more times than I can count, all with baby in tow.   It’s actually one of those things that is easier the more you do it, but here is what has worked for us (open to feedback/other ideas)! I always take the stroller (it’s not a travel one, it’s quite bulky) and his giant bag as my carry on.  If he needs picking up, I put him in his carrier (bjorn, ergo baby, etc.) which is stashed underneath and I can throw his bag in the stroller.  It’s easy to get around this way.  I can feed him during meal times propped totally up, and I can take him strapped into the family restroom with me without worrying that he’s going to touch anything.  He inevitably ends up having some explosive bathroom session on all of our long haul flights.   I have literally thrown out the shirt that I am wearing and gone to my back up (which I ALWAYS have in his bag) twice while traveling because of bodily fluids which are just not worth traveling with.  Gross and TMI I know, but this is the reality of being a mom, at least for me!  I have tons of aiden and anais swaddle blankets which I can lay down underneath his little travel diaper thing to make sure that he isn’t touching anything.  Honestly, I care way less about this now that he’s older than one.  I let him hang everywhere in airports now (exposure exposure exposure, right?) but yesterday he ate something off of the floor on the plane that he had dropped and that was a bridge too far — I ripped it out of his mouth. He spends a lot of time on the floor between my legs.  Now that he’s walking and standing he likes to use his own two feet!  He spends time crawling all over me tugging the hair of the passengers in front or flirting with the ones behind.  When they reach their limits, I place him between my legs and put toys in my lap.  We of course walk the aisle whenever possible on longer hauls.  We also do permit TV on flights now — with the inbuilt TVs, it’s impossible to keep off.  He knows how to adjust the brightness.  He honestly can’t watch for too long and I will trade that exposure for a moment of stillness on a really long flight.  We don’t watch TV at home and I try to limit screens as much as possible.  Flights feel like one of those times where all rules are cast aside. 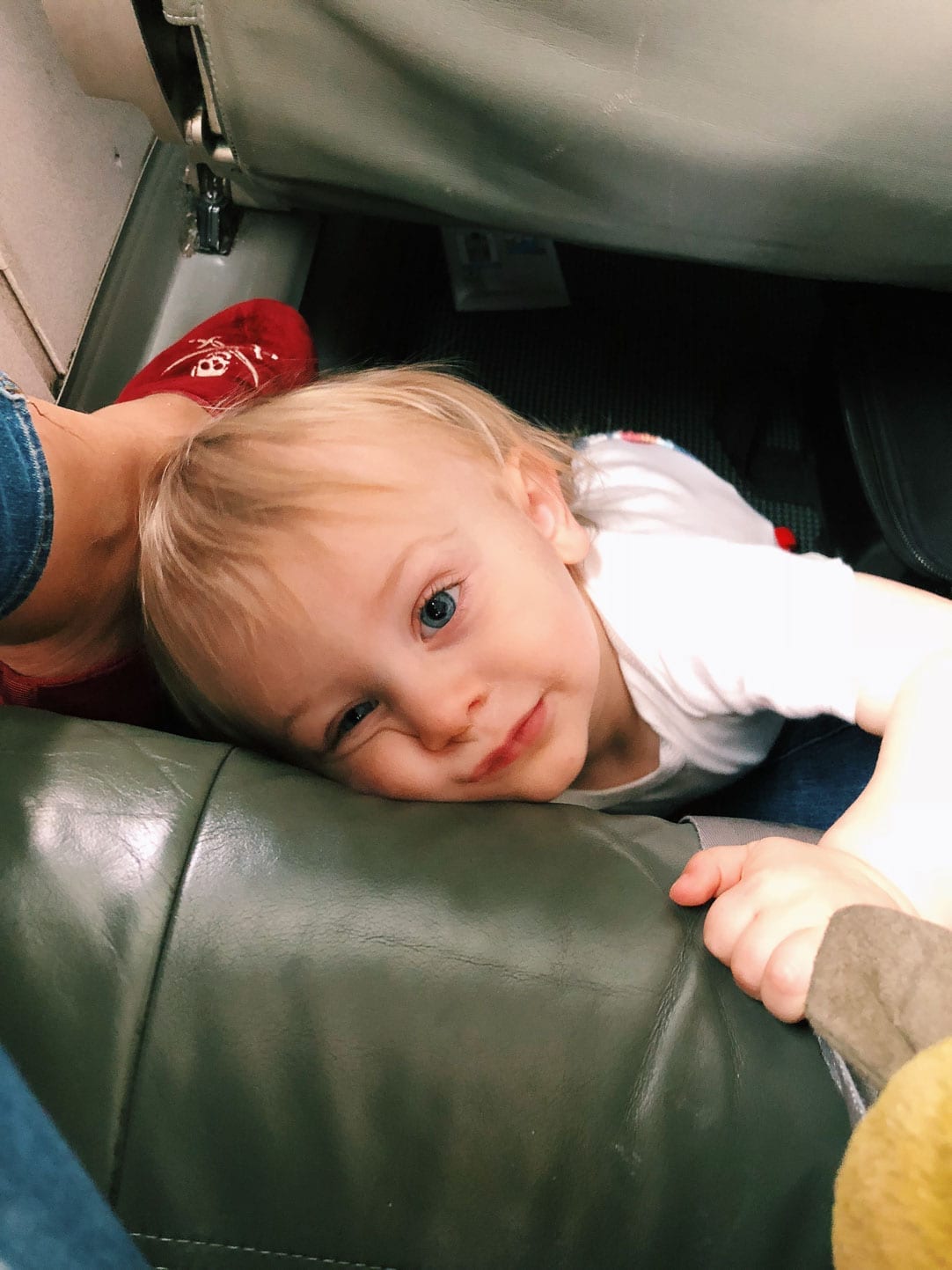 That being said, we try to spend lot of time NOT looking at the screen, and we bring little toys with us.   His favorite though is to play with bottle caps.  A typical boy, he’s very interested in the way things work.  We find that rattling the snack bags and shaking the water bottles handed out are as adequate a toy as any.  As is reading the safety card and puppets made from the air sick bags… we do what we can! It’s well worth it in the end! xx